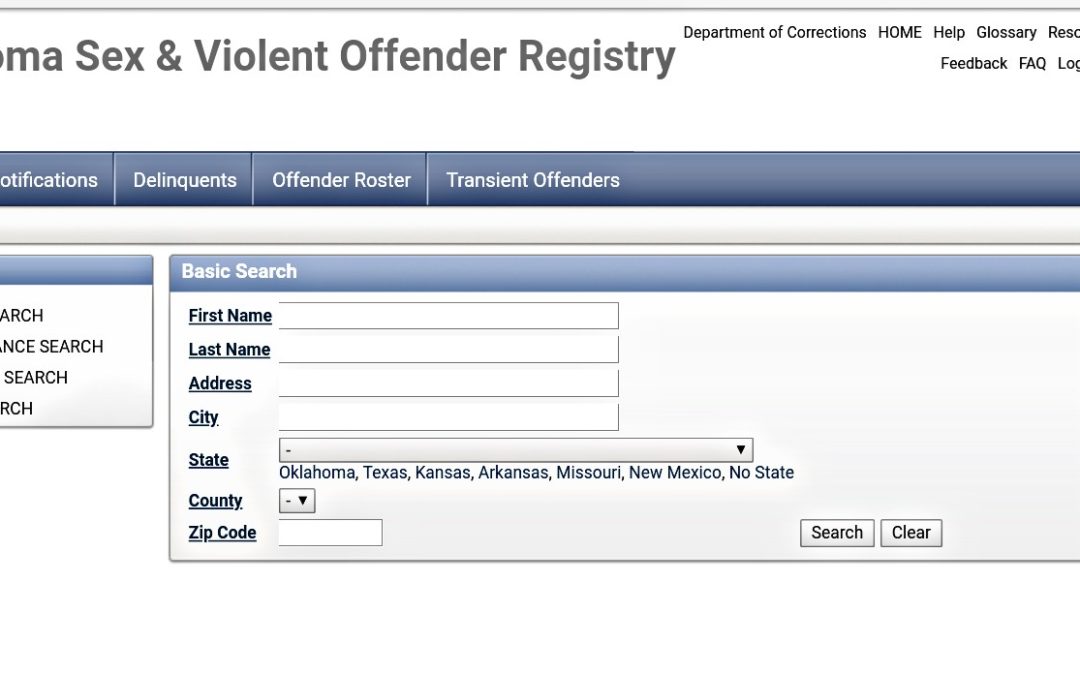 Persons convicted of, or put on probation for, certain sex crimes are required to register as a sex offender. Obviously, this has a detrimental impact on the person required to register. It can affect a person’s ability to maintain or get a job and find a place to live. If you’ve been charged with a sex crime, you need the best Tulsa sex crimes attorney. For aggressive and experienced criminal defense, call the Cale Law Office at 918-277-4800. This information is for educational purposes only and is not legal advice. Laws change often and are subject to change.

What Is A Sex Offender Registry?

A sex offender registry is a list of all convicted sex offenders in a state. You can search the entire country through the National Sex Offender Public Website (NSOPW). Sex offender registries generally include the offender’s address, physical appearance, and criminal history. Oklahoma has its own Sex and Violent Offender Registry.

Whom Does the Registry Apply To?

The Oklahoma Sex Offender Registration Act applies to anyone who:

1) Is residing, working in, or going to school in Oklahoma;
2) Who has received probation for, or been convicted of;
3) Committing, attempting, or conspiring to commit certain sex crimes after November 1, 1989.

This includes persons convicted of the certain sex crime outside of Oklahoma. Sentences rendered outside the Oklahoma judicial system include those from any court of another state, a federal court, an Indian tribal court, a military court, the District of Columbia, Puerto Rico, Guam, American Samoa, the Northern Mariana Islands and the United States Virgin Islands, or a court of a foreign country.

A person convicted of the following crimes after November 1, 1989, must register as a sex offender. Neither the sentencing court nor the district attorney may exempt the person from the registration requirements.

Are There Any Exceptions To Registering?

Also, effective November 1, 2009, the provisions of the Sex Offenders Registration Act will not apply to any person who has received a criminal history records expungement for a conviction in another state for a crime or attempted crime which, if committed or attempted in this state, would be a registerable crime.

Additionally, the provisions of the Sex Offenders Registration Act do not apply to any such person while the person is incarcerated in a maximum or medium correctional institution of the Department of Corrections.

Can A Person Be Removed From Sex Offender Registry?

1) Has only one conviction for any rape crime in violation of 21 O.S. 1111.1 (Rape) or 1114 (Rape By Instrumentation);
2) Is not required to register because of any other registerable sex offense; and
3) Was not more than four years older than the victim of the crime who was 14 years old or older but not more than 17 years of age at the time the person committed the violation.

Secondly, a person who has yet to be sentenced for a conviction of a violation of 21 O.S. §1111.1 or 1114, and who meets the criteria mentioned above, may ask the sentencing court for removal of the requirement to register as a sex offender.

A person meeting the criteria may petition the court of the county of conviction for removal of the requirement to register. If the court grants the petition and orders the removal of the registration requirement, the Oklahoma Department of Corrections will remove all information pertaining to the offender from the sex offender registry upon receipt of a certified copy of the order. Removal does not alter or expunge any criminal history or other record of the person that is otherwise available as a public record.

If the court denies the petition or motion, the person cannot file any further petitions or motions for removal of the registration requirement.

Lastly, any person assigned a level one (low) criteria who:

1) Has been registered for a period of ten years; and
2) Has not been arrested or convicted for any felony or misdemeanor offense since being released from confinement

may petition the district court in the jurisdiction where the person resides for removing the level designation and allowing the person to no longer be subject to the registration requirements of the Sex Offenders Registration Act.

What Should I Do If I’m Accused Of A Sex Crime?

Don’t talk to anyone about the circumstances of the allegations. You especially must not talk to police or any investigator from the Department of human services. See Top 10 Reasons NOT To Talk To Police.

If you’ve been accused of or charged with, a sex crime, you need the best Tulsa sex crimes attorney. Attorney Stephen Cale understands that your life, liberty, reputation, and future are at stake. Attorney Cale has handled numerous sex crimes cases. To schedule your free initial consultation, call the Cale law office at 918-277-4800.

Attorney Stephen Cale has been practicing for 20 years and dedicates his practice to criminal defense. His goal is to provide you with the best possible result no matter what you are charged with.