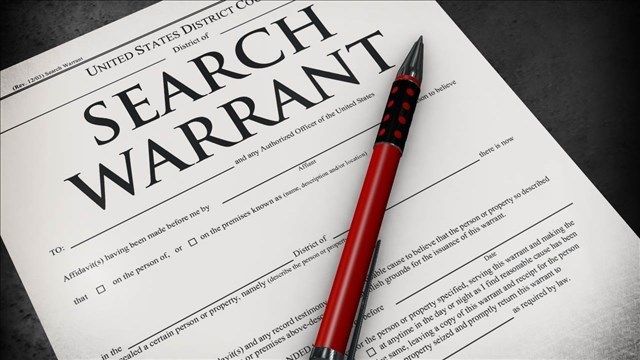 One the biggest court battles in criminal cases concerns whether a search was legally valid. Tulsa criminal defense attorney Stephen Cale explains that there are six exceptions to the search warrant requirement. This is for informational purposes and not legal advice. If you’ve been charged with a crime, call Cale Law Office at 918-277-4800 for your free initial consultation and defense strategy plan.

The Fourth Amendment to the U.S. Constitution reads: “The right of the people to be secure in their persons, houses, papers, and effects, against unreasonable searches and seizures, shall not be violated, and no Warrants shall issue, but upon probable cause, supported by Oath or affirmation, and particularly describing the place to be searched, and the persons or things to be seized.” Simply put, a valid search must be reasonable or must be done through a valid search warrant.

There are six exceptions to the warrant requirement. That means six circumstances where a warrantless search is deemed legally reasonable, and therefore, valid under the Fourth Amendment.

A police officer may stop a person without probable cause for arrest if he has an “articulable and reasonable suspicion” of criminal activity. In that instance, if the officer also reasonably believes that the person may be armed and dangerous, he may conduct a protective frisk. The scope of the frisk is generally limited to a patdown of outer clothing for concealed items that may be used in an assault.  However, an officer may reach directly into an area of the suspect’s clothing without a preliminary frisk when he has specific information that a weapon is hidden there.

Police can conduct a search if they have voluntary consent to do so. Whether or not the consent was voluntary is determined from all the circumstances. Knowledge of the right to refuse consent is just one factor to be considered. It should be noted however that the officer’s false statement that he has a warrant invalidates the possibility of consent. Tulsa criminal defense attorney Stephen Cale suggests that people NEVER consent to a search of their home, car, or anything else that a person owns or possess.

Any person with an apparent equal right to use or occupy the property can consent to a search. Any evidence found as a result of the consent may be used against the other owners or occupants. Remarkably, the search is valid even if it turns out the person consenting to the search did not actually have such right, as long as the police reasonably believe that the person had authority to consent.

A parent generally has authority to consent to a search of the child’s room – even an adult child – as long as the parent has access to the room. But depending on the child’s age, a parent might not have authority to consent to a search of locked containers within a child’s room.  The scope of the search is limited by the scope of the consent. Consent, however, extends to all areas to which a reasonable person under the circumstances would believe it extends.

Search Incident to a Lawful Arrest

Police may conduct a search incident to an arrest as long as the arrest was based upon probable cause. If the arrest violates the Constitution, the search will also violate the Constitution. The phrase “incident to” means ‘closely related’ or ‘resulting from.’ Police may conduct a search incident to arrest whenever they arrest a person. The rationale for the search is to protect the arresting officer and to preserve evidence. However, the police do not need to be actually in fear for their safety or believe that they will find evidence of a crime as long as the suspect was placed under arrest.

However, this rule does not apply to issuing a traffic citation. If a person is not arrested for a traffic violation, there can be no search incident to arrest. This is true even if the state law gives the officer the option of arresting a suspect or issuing a citation.

If the police have probable cause that a vehicle contains contraband or evidence of a crime, they may search the vehicle without a warrant. The rationale for this is that vehicles are mobile and will not be available for search by the time an officer returns with a warrant. Additionally, the Supreme Court has declared that people have a lesser expectation of privacy in their vehicles than in their homes. This exception can apply not only to what is inside the vehicle but the vehicle itself. So, if police have probable cause to believe that a car itself is contraband or evidence of a crime, the car can be seized in a public place without a warrant.

If police have probable cause to search a vehicle, they can search the entire vehicle – including the trunk – and all containers within the vehicle that might contain what they are searching for. For example, if the police have probable cause to believe that drugs are inside the vehicle, they can search just about any container. The search can go beyond the driver’s belongings. The items belonging to a passenger can be searched as well. For example, the U.S. Supreme Court upheld a search of a passenger’s purse where the officer noticed the driver had a syringe in his pocket.

Police can make a warrantless seizure when they: 1) are legitimately on the premises; 2) discover evidence, fruits or instrumentalities of a crime, or contraband; 3) see such evidence in plain view; and 4) it is immediately apparent that the item is evidence, contraband, or a fruit or instrumentality of a crime.

Police officers in hot pursuit of a fleeing felon may make a warrantless search and seizure. When the police have probable cause and attempt to make a warrantless arrest in a public place, they may pursue the suspect into private dwellings.

Without a warrant, police can seize evidence likely to disappear before a warrant can be obtained. An example this is scrapings of tissues from under a suspect’s fingernails, which can be washed away. Whether this warrantless search is reasonable is judged by the totality of the circumstances.