Police Trickery: The False Evidence Ploy | How It Hurts the Innocent and Impacts a Jury 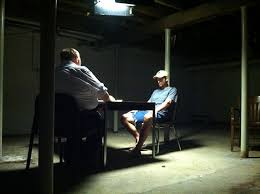 If you’ve seen my other articles and videos, you know that I tell people to never talk to the police. There is a well-known law professor named James Duane who gave a presentation on the Top 10 Reasons Not to Talk to Police. You can see a summary of that presentation here. Even jurists sitting on the highest court of the land know the danger of talking to police. The late Supreme Court Justice Robert Jackson stated that no one should talk to police. Here’s what he said:

“Any lawyer worth his salt will tell the suspect, in no uncertain terms, to make no statement to the police under any circumstances.” – U.S. Supreme Court Justice Robert Jackson in Watts v. Indiana, 338 U.S. 49 (1949)

The bottom line is that people – even innocent people – wind up in jail or prison because they have spoken to police. Police will use all kinds of tricks to get a person to confess –even falsely confess – to a crime. One kind of trick is called the False Evidence Ploy.

What Is a False Evidence Ploy?

A false evidence ploy is a claim by police that they have evidence that implicates the suspect. But in fact, the so-called evidence doesn’t really exist. Here are some examples:

• Identification testimony. In this type of false evidence ploy, an officer or detective will claim to have an eyewitness or video evidence that implicates the suspect.

• Demeanor ploy. This is a false statement by police that the suspect’s demeanor indicates, or points to, his guilt.

How Do Jurors Evaluate Confession Evidence?

• Jurors rely on confession evidence more than any other forms of evidence.

• Even if jurors rated a confession as less voluntary and believed that the confession did not affect their decision, they were still more likely to convict than jurors who did not read confession evidence.

One researcher says that jurors may not know much about police interrogation. Jurors also may accept the myth of psychological interrogation. This is the belief that people will not falsely confess unless there is some kind of mental illness, cognitive limitations, or physical torture. The research suggests three reasons why jurors find false confessions difficult to understand.

First, some jurors understand the degree to which police interrogation is manipulative persuasion. However, many state they know less than they should when asked to consider interrogation and confession evidence. That sounds like an uninformed jury handling the fate of a defendant.

Secondly, jurors find it hard to believe that suspects would go against their own self-interest confessing to something they did not do.

For more reading on the subject and a deeper discussion of research studies, click here.

Are you looking for the best criminal defense attorney Tulsa has to offer? Call the Cale Law Office at 918-277-4800. Schedule your free initial consultation with attorney Stephen Cale. Attorney Cale has nearly two decades of experience. He also has the right kind of experience because he focuses his practice on criminal defense.

Criminal defense attorney Tulsa Stephen Cale said that whether or not a person voluntarily made a statement to police requires a case-by-case analysis. Obviously, physical torture that results in a confession is not voluntary. In some instances, a confession will be deemed coerced even without physical torture or threats of physical injury. An appeals court will not reverse a conviction simply because the police used false evidence ploys. The Supreme Court has allowed confessions to be admitted that were induced by false evidence another police tricks. However, there are some instances where the court draws the line and sets some limits.

The best criminal defense attorney Tulsa has to offer will tell people not to talk to police. Even if the client has talked to police and given a statement, attorney Stephen Cale will try to get the evidence thrown out. Attorney Cale will first look at the charge to see whether not it is validly filed. If it is not, he can file a motion to dismiss the charge. Secondly, he will file a discovery motion. This forces the state to turn over evidence that it has concerning the defendant. This even covers favorable evidence that the prosecution has concerning the defendant.

The best criminal defense attorney Tulsa has to offer will have high reviews. Clients of attorney Stephen Cale give him very high reviews. You can see some of what his clients say his testimonials page. Clients often refer other people to him because he did a good job for them, and trust that he will do the same for others. Attorney Cale handles a wide variety of criminal cases, from misdemeanors to felonies. He has handled serious cases such as murder, sexual assault, robbery, drug trafficking, child abuse, and sex crime related cases. Schedule your free initial consultation by calling 918-277-4800.